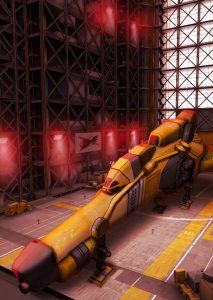 Very little is known of the Independent Trade & Mining Consortia other than their presence in almost all of the Sol System Commercial enterprises. Their independence from the two larger faction places them in a position to quietly carry on their business enterprises without undue attention.

Reports indicate that their vessels are often seen at locations where there are heavy freighter traffic and around border regions.  The most notorious of these are the Heavy Raiders.  These ships are fast, nimble and can carry a large quantity of heavy weaponry.  Several have been spotted at the Canton-Mars Trade Routes and sometimes around Joint MAC-UNE Mining facilities in the Asteroid belts.

Information of these Raiders are mostly derived from the Logs of the UNE Tactical Science Vessel UNES Tigris.  Prior to the commencement of hostilities between the UNE and MAC forces, The UNEs Tigris operating in the vicinity of Vesta Facility was attacked without provocation by a new ship not found in its vessel registry.  Tigris had reported that the “Raider” as it was known now, was able to jump from one location to another defeating weapons lock-on.  The “Raider” disappeared before Tigris had the opportunity to attack the vessel. This encounter between the UNES Tigris and the ITMC Meko Raider was from Journey's End (Part 1).