This is where you will find all things UNITY!!.   From participating as contributors (Here!!)   to buying and immersing yourself in the UNITY macroverse ( Here!! )  and generally keeping up with our many community activities ( Here!! ) you can be assured that no days are the same in UNITY as it’s meant to be.

To get you started, we’ve prepared a short introduction video to give you an understanding on what we have done. 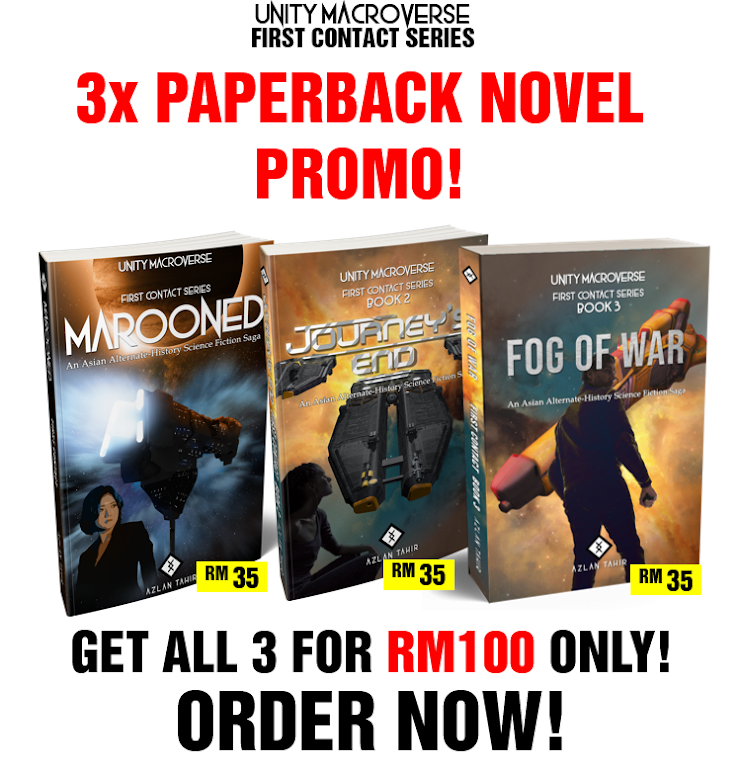 Great news for sci-fi lovers!
The first 3 parts of the FIRST CONTACT story arc from the UNITY Macroverse is now available in paperback format! Previously only available on amazon for worldwide distribution (and a bit more costly for local purchase), we are pleased to announce LOCAL AVAILABILITY at a reasonable and fair price!
These three books are the novelisations of previously-published graphic novels and short stories, combined and interlinked and even updated – with deeper details not previously expressed in their prior formats!
“Marooned” (208 pages) is Book 1 in the “First Contact” Series from the Unity Macroverse. Explore key characters as well as numerous locations across the Solar System including sprawling independent settlements throughout the asteroid belt.
“Journey’s End” (218 pages) is Book Two, picking up after Book One, “Marooned”.
“Fog of War” (280 pages) is Book Three from the same series and continues the story after “Journey’s End’.
CLICK HERE to order with us!

Hello UNITEERS!! We have news!!

We have begun converting the UNITY Stories to Novel format and selling it on   Amazon US.

The first Book was out last month.

These are available in eBook on Amazon.

Yes it is! Click here to view latest free chapter from UNITY Macroverse!

What is the Unity Macroverse?

The premise of Science-Fiction is coupled with and Alternate Timeline that goes back to the 13th Century and is centred around Asia.  The fundamental “what if” in UNITY relates to the Treasure Ships of the Ming Dynasty which is further elaborated in the following UNITY wiki.  Click here to find out more about the UNITY History!!!

The central characters in UNITY are Asian but is focused within the region of South East Asia. We commenced our story telling of the UNITY Universe through Graphic Novels.  The intention was to allow an easier flow into the story canvas that we were building.  Most of the major characters were introduced in the first three Graphic Novels through Marooned, these were followed up with the other five titles.

As the Graphic Novels progressed we began to introduce other story medium with lowered barriers to enter as we saw that Community was beginning to insist on participating in growing the story canvas.  We eventually ended up with Micro Stories, and eventually to the Short Stories.

HOW TO GET STARTED?

Future plans for the Unity Macroverse?

We are constantly evolving as the future is never a certainty.  We continue evolving in the direction that the community takes us.  You drive the story!!  Unity Macroverse Malaysian Sci-Fi Story canvas is in your hands.  Become a UNITEER by dropping us a line and enrolling as a subscriber today!!.